The documentary about the Rotunda can be found here

Dear donors, in cooperation with the company PANO3D, the Faculty has prepared a virtual tour of the reconstructed St. Wenceslas Rotunda. You can view it here

Another crucial stage of the Preservation Project of St. Wenceslas Rotunda in Prague’s Lesser Town Square was concluded with the final approval that took place at the end of June.

As part of the construction work, a metal footbridge has been installed allowing the visitors to take a look around the area formally occupied by the Rotunda. Thanks to the replicas of the original tiles laid out in it, they will also get a better picture of the Rotunda’s original overall size and dimensions. Archaeological research that testifies to the uniqueness of the whole discovery is likewise coming to a close. 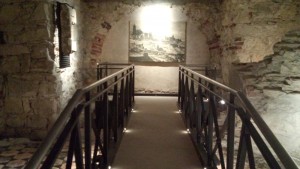 Reconstructed interior of the Rotunda

A replica of the 11th century tiling has been laid in its original position inside the Rotunda. These 290 tiles of three shapes make up ¼ of the flooring area of the Rotunda, and match the original fragment of the historical tiling forming nearly 5% of the overall ground surface. A fragment of a Romanesque window frame is also displayed inside the Rotunda. A stone circle from an even earlier structure made of wooden stakes can also be seen here.

In the course of their research, the archaeologists have documented a jewellery collection dating back to the 9th and 10th centuries, six skeletons belonging to a knight’s family from the era of John of Bohemia and more than 3,000 pottery fragments. All these findings have transformed the space undiscovered by experts until only recently into one of the most significant archaeological sites in Prague. The Rotunda was in fact considered vanished for more than 300 years before it was accidentally discovered twelve years ago, during the reconstruction of the FMP CU building which is currently the seat of the Faculty’s IT department.

Over the summer, a holographic projection will be installed, and information boards complemented by an interactive presentation will be finished. A selection of exhibits will be situated in display cases before the Rotunda’s entrance. The Rotunda will be officially unveiled during an opening ceremony which will take place three months after the final building approval, on Czech Statehood Day celebrating St. Wenceslas. And so after almost 400 years it will witness yet another Wenceslavian miracle.

Reconstruction, archaeological, and restoration work on the Rotunda has been financed from the Norway Grants project. However, nearly 600 donors have so far supported the Preservation Project financially via the online application http://www.nase-rotunda.cz/en. The amount of 200 000 CZK is still left to be collected before the goal of 2,4 million CZK is reached and the Rotunda can be occasionally made accessible to wider public. 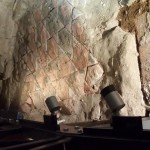 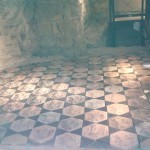 Replica of the historical tiling

On Wednesday, June 6, vice-dean Dr Martin Vlach guided the students of the University of Third Age on a tour of the Rotunda. The winner of the Designer11 th competition and a representative from Ministry of Finance of the Czech Republic were also among the attendees. In his presentation, Dr Vlach spoke about the history of the Rotunda as well as new findings that had emerged from archaeological and reconstruction work on site. Because the construction work is currently nearing its completion, the group was divided into two smaller groups. While one was led by Mr Rafl, the head supervisor of the reconstruction work, who provided his expert commentary, the second was guided through underground spaces of the Lesser-Town Faculty building by Anna Kotěšovcová from Media and Communications Office, FMP CU. 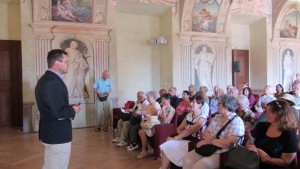 We would like to thank all participants for their interest and engaging questions, and our colleagues for organising the event.

The competition held to determine the tiling layout for St. Wenceslas rotunda has found its winner. His name was announced by the expert jury gathered at the Professed House in the Lesser Town in the last days of March. Doc. Oldřich Semerák is the author of the winning pattern that will serve as a blueprint for the distribution of flooring tiles in the reconstructed rotunda.

On Wednesday, March 22, 2016, the jury met in the Professed House building of the Faculty of Mathematics and Physics, Charles University, Prague. Its ten members named the winner of the Designer11th for St. Wenceslas Rotunda competition.

Out of more than 30 submissions by 12 contributors, the jury handpicked the winning design: the layout aligning the tiles into symmetrical, heart-shaped patterns proposed by doc. Oldřich Semerák, Director of the Institute for Theoretical Physics, FMP CU. 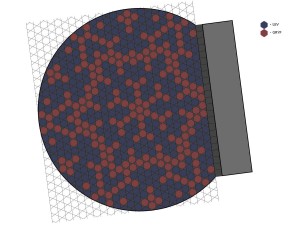 The organisers received contributions by the Faculty staff, students and alumni, but designs made by wider academic public were also represented. Doc. Semerák submitted more than 20 layouts charting the possible distribution of the tiles.
The jury was impressed by the mathematical explanation of the possible geometrical distribution of the different types of tiles, as well as by the winner’s adherence to the historical aspects of the monument and its architectural style

The jury also considered the layouts proposed by Vendula Klimetová from the 2nd Medical Faculty CU and those by Zuzana Štauberová from the Department of Mathematics, Faculty of Applied Sciences, University of West Bohemia, Pilsen. 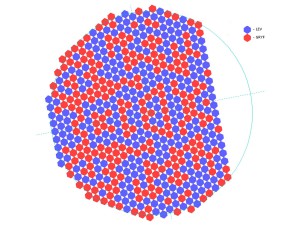 Mathematical precision of the layout A007015, proposed by Pavel Kaňkovský from FMP CU, also caught the jury’s attention.

An original approach was used by Anna Otrubová, a FMP CU student, who created a computer programme generating random distributions of the tiles. She was also the only contestant to work with the possibility of variable orientation of the tiles.

A special prize was awarded to the youngest contributor, five-year-old Martin Hlávka, for his design of “tiling number 2.”

The tiles will be laid in the restored part of St. Wenceslas rotunda in April 2016 according to the layout designed by doc. Semerák. The public will then be able to see the final product from September 28, 2016. The winning author’s name will be displayed inside the Rotunda, and he will also receive a prize in the form of a Klein bottle and a financial reward.

The competition was organised and announced by FMP CU on January 8, 2016. Individuals and groups from the academic public were encouraged to participate by submitting any number of designs. To enter the competition, the applicants were asked to create a design that would respect the distribution of the preserved original tiles.

The construction part of the project, which will allow for public access to the Rotunda and prepare it for presentation purposes, is in full swing. Presently, a steel footbridge is being built (1040mm wide and 9515mm long) that will cross the space over. The photograph shows the current state of the bridge (April 12, 2016).

Meanwhile, restorers are working on replicas of the unique tiles. The procedure is very complicated; the restorers are attempting to determine the quality of the material as well as the most precise methods of firing. We are excited to share a couple of photographs displaying the provisional test tiles. 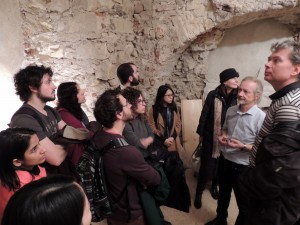 A group of international students enrolled in the “Advanced Masters in Structural Analysis of Monuments and Historical Constructions” study programme (http://www.msc-sahc.org/) visited St. Wenceslas rotunda on Friday, March 11. The study programme is run by the Faculty of Civil Engineering, CTU, Prague, in cooperation with three foreign universities and ITAM CAS under the Erasmus Mundus (Erasmus+) programme. The visit was facilitated by the longstanding cooperation between GEMA ART GROUP Inc., the guarantor of the construction and restoration work on the Rotunda, and Czech Technical University, Prague.

Accompanied by their lecturers, Prof Petr Kabel, doc. Eva Burgetová, and David Biggs P.E., S.E. (USA), the students had the opportunity to learn about the rotunda’s construction history and the nature of the present conservation measures. Ing. Petr Justa and restorer Malvína Pešková provided expert commentary and answered a number of queries. 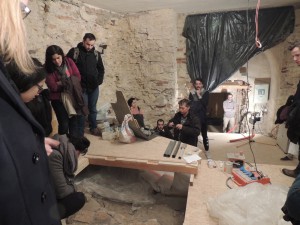 Faculty of Mathematics and Physics, CU, has launched a competition named “Designer11th for St. Wenceslas Rotunda.” The aim of the competition is to design a complete tiling layout with respect to the distribution of the 21 surviving original tiles. The winning layout will be physically implemented in St. Wenceslas Rotunda in the Lesser Town quarter in Prague by a team of archaeologists and restorers in the course of April 2016.

Coverage of current events taking place in the rotunda was broadcast in the main news programme of the Czech Television on Sunday, 14 February 2016.

Restoration and construction work on the Rotunda started on Monday, 11 January 2016, following the official handover of the site attended by the representatives of the contractor, archaeologists, restorers, and the investor (Faculty of Mathematics and Physics, CU). In the opening meetings, the conditions and ways of securing the architecturally valuable components and archaeological findings were discussed, the course of implementation detailed, and photographic documentation of the original state of the site was made. Relevant authorities (building authority, heritage preservation bodies, labour inspectorate) were informed of the commencement of the works.

Supported by Grants from Iceland, Lichtenstein, and Norway.

The Project is part of the CZ06 Programme supported by the EEA Fund.
Detailed results

Donations towards the restoration of the Rotunda

Make a contribution to the Preservation Project here:
http://www.nase-rotunda.cz/en/